The First Lie: Thou Shalt Not Surely Die

In my post yesterday, I mentioned the second lie satan gave, ‘Ye shall be as gods, knowing good and evil.’ I shared how this was a counterfeit belief, urging disobedience as the method to be ‘as gods.’ Whereas Jesus demonstrated that IN OBEDIENCE, we will become as God, reflecting the divine character of Christ, having the mind of Christ.

Today, I will share on the first lie of satan that many still cling to today. In fact, the immortality of the soul is a lie that leads many away from God, as the lie of the eternally burning hell gives people the thought that if a God of love would eternally torture people, then I want no part of it. (Again, I will discuss this topic later.)

Gen 2: 16-17 ‘And the Lord God commanded the man, saying, ‘Thou shalt eat freely of every tree of the garden, but of the tree of knowledge of good and evil, thou shalt not eat of it: for in the day that thou eatest thereof, thou shalt die the death. (Geneva, 1599).

Here is the condition: Do not eat of this one tree. God was testing their loyalty to His sovereignty. It’s only in this one tree that satan was able to test them also.

From the comments of the Geneva Bible one reads, ‘By this death, he meant the separation of man from God, who is our life and chief felicity; and also, that our disobedience is the cause thereof.’

This is a spiritual death. When we disobey God’s law of government, we sin (1 John 3:4). Sin leads to death. (Rom 6:23). This disobedience in eating of the fruit was an act of idolatry in a sense. Eve liked the thought of being ‘as god’ above/equal to the God of heaven. She also began to doubt God’s truthfulness.

With the act of disobedience (sin), man was driven from the garden where the Tree of Life was located. They were to die physically also.

Yet, from the foundations of the earth, a plan had been created that man may still live spiritually. This was the reason that Jesus came to die for our sins, so spiritual life may be restored.

Let’s look at this equation.

If you remove the breath, what do you have? A body. 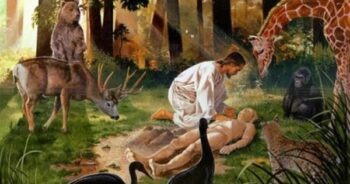 Is the soul still alive without the breath? No.

It’s like an electric lightbulb. If you supply it with electricity, it turns on and shines. If you remove the electricity, there is no way for the bulb to shine (live).

You cannot remove either the body or the breath and still have a living soul.

1 Tim 6: 16 tells us that only God is immortal. ‘Who only hath immortality, dwelling in the light which no man can approach unto; whom no man hath seen, nor can see: to whom be honour and power everlasting. Amen.’

In heaven, where we WILL be immortal, we will be eating of the tree of life regularly. Paul tells us that at the coming of Christ, those who are walking in obedience to God’s law, will be changed from mortal to immortal, in a twinkling of an eye.

At the current time, we do not experience this.

Eccl 12:7 tells us that our breath returns to God at the time of death. ‘then the dust will return to the earth as it was, and the spirit will return to God who gave it.’ Spirit = breath in the Bible.

Further evidence of this is in Acts 17

Vs 25: ‘Neither is worshiped with men’s hands, as though He needed any thing, seeing He giveth to all life, and breath, and all things.’

Without God’s breath in us, we have nothing. We would not exist.

Without God, we would cease to exist.

Where did this lie come from that is so prevalent in our churches?

Even though satan brought in the lie to Eve in the garden, it was not a common belief in the church until years after Christ ascended into heaven. Even in the miracle of raising Lazarus from the dead, Martha and Mary both admitted that he would be brought back to life at the resurrection.

The immortality of the soul is an ancient pagan belief brought into the church after Constantine made Christianity legal and instituted Sunday worship. You can learn more about this here.

There is nothing biblical regarding the immortality of the soul. If you want  more information on what the Bible teaches about the state of the dead, you can click here.

Why is this important?

When people are deceived regarding the true state of the dead, they are opened for further deception (spiritualism). In the upcoming days, satan will be bringing out ‘the big guns’ with his deceptions, even appearing to ‘raise people from the dead.’ He will counterfeit many of the events of Christ’s second coming.

IF we are not careful and know the Bible truth, we will be deceived. Those who believe in the immortality of the soul will be deceived by demons appearing as the dead. (King Saul experienced this when he used a witch to ‘contact’ Samuel the prophet. It led to his total destruction.)

I urge each to study their Bibles like never before. If we do not fortify our minds with the truth, we will be deceived. The only way to be able to spot the counterfeit is to know the truth intimately. There are many counterfeit versions. We cannot study them all, but there is only ONE truth. We can study that one in minute detail, asking God for His guidance. Allow the Bible to interpret itself, rather than relying on the traditional interpretations of men. We are to rely on God’s truth alone, rather than the doctrines of men.

Be As ‘Gods’ Lovers of Pleasure