As I was reading Psalms 119 this morning, I took note of the many times David wrote of keeping God’s law. Verse one begins with ‘Blessed are the undefiled in the way, who walk in the law of the Lord.’ This same theme is repeated over and over throughout the chapter. In fact, it is keeping the law, or rather not keeping it, that kept the children of Israel in trouble all throughout their history.

One common refrain is: ‘Oh, the Law has been done away with.’

Hmmmm, my Bible reads in Ps 111:7-8, ‘The works of his hands are verity and judgment; all his commandments are sure. They stand fast for ever and ever, and are done in truth and uprightness.” Just like we read in Genesis 21:33 that God is everlasting. The law is the demonstration of God’s character.

Another characteristic shared by God and the law is that they are both unchangeable. Jesus said in Matt 5: 17-18, “Think not that I am come to destroy the law, or the prophets: I am not come to destroy, but to fulfill. For verily I say unto you, Till heaven and earth pass, one jot or one tittle shall in no wise pass from the law, till all be fulfilled.”

Jesus came to fulfill the law, to show how it was to be followed. Since He did obey the law, He was considered sinless. Then He was able to pay the price of our breaking the law (which is sin, 1 John 3:4). We know the wages of sin is death (Rom 6:23). *Just FYI, wages of sin = DEATH, not a state of eternal suffering. But that is another topic for another post.

James 1: 17 describes God as unchanging. ‘No shadow of turning.’ 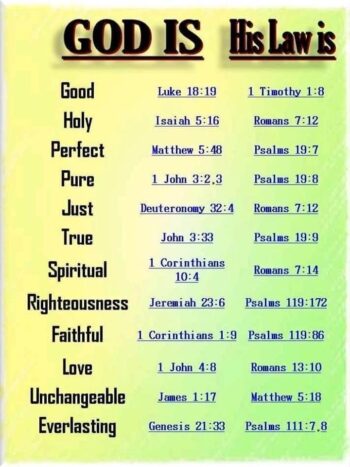 So God and the law are both eternal and unchanging.

The majority of people today say that the 7th day Sabbath has been changed to Sunday. How can this be if we just saw the law is unchangeable?

Some say it has been done away with. Again, how can this be if it is eternal and unchangeable??

In fact, we see in Rev 22:14 that it is those who ‘do His commandments’ that are allowed to enter into the Holy City and have access to the Tree of Life.

Jesus said in John 14:15, ‘If you love Me, keep my commandments.’ I do not know how much simpler you can get. Or how much plainer.

‘Oh,’ some say, ‘Only the 4th commandment has been changed.’

Seriously?? The commandment that begins with ‘REMEMBER???’ This one has been changed???

Again, we have already read that the law is eternal and unchangeable.

The Sabbath was given at Creation week. No Jews existed. Only Adam and Eve. I’ve addressed this topic before also. The Sabbath is no more for just the Jews as is marriage is just for the Jews. (They were both established during Creation week.)

Throughout the Bible, both Old and New Testament, the importance of following God’s law is stated. It’s repeated over and over again. The Ten Commandments are the foundation of God’s government in heaven. No one will be allowed to enter into the kingdom of God unless they will obey the laws of the kingdom. We are told that sin (breaking of the law) will never rise again. This means, everyone will be law keepers.

Just as when a prisoner gets pardoned from death row, he is now expected to go and live according to the laws of the land. If not, if he returns to his previous law-breaking, he will end up back on death row with no hope of escape.

We cannot keep the law in our own power. The ‘new covenant’ is that God will write His law on our minds/hearts and then give us the strength to walk in obedience. We are to walk as Jesus walked (1 John 2:6).

Jesus Himself reminded us that not all who say, ‘Lord, Lord’ will be in the kingdom. Matt 7:21-23, “Not every one that saith unto me, Lord, Lord, shall enter into the kingdom of heaven; but he that doeth the will of my Father which is in heaven. Many will say to me in that day, Lord, Lord, have we not prophesied in thy name? and in thy name have cast out devils? and in thy name done many wonderful works? And then will I profess unto them, I never knew you: depart from me, ye that work iniquity.”

Obedience, according to 1 John 3, demonstrates that we know God.

It stands to reason then, from the verses above, that if we do not obey the law, then we do not know God. In fact, the chapter says in very plain language that those who disobey the law are children of satan/devil. That’s a pretty strong wording for those who are ‘workers of iniquity.’

Rather than the law being done away with, the Bible is filled with promises for those who walk in obedience. Salvation and health are promised, as are many other blessings.

I urge each to read and study yourself. Do not rely on the traditions of men. These will lead to destruction. Salvation comes from a restored relationship with God. This is demonstrated through obedience to His law.

Predestination: Are Only Some People Chosen to be Saved? Are Afflictions the Result of Disobedience?