Are We Truly Listening? 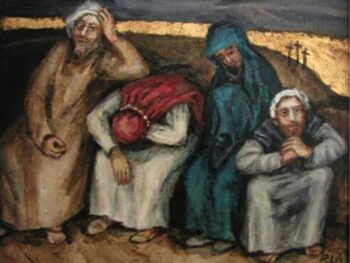 The apostles were very disappointed/heartbroken after Christ was crucified. They had had their hopes fixed on Jesus taking over as King in Jerusalem. They were so fixed on this idea that they did not listen as they should have when Christ told them that He would be crucified and then rise from the dead on the third day. Jesus even told them that His kingdom was not here on earth.

We get that way sometimes. We do not want to hear a certain truth spoken. Rather, we tend to hear selectively the information that fits what we already believe or want to be true. We close our minds to anything that contradicts our current mindset. ‘If we do not believe it, then it must not be truth.’

This comes from the false doctrine being taught that truth is relative. Opinions are relative. Our mindset can be relative

to what we have been taught or searched out on our own. However, truth is truth. It is always truth, even if a particular person does not believe it.

Jesus said He was the truth. The Bible is the standard that believers are to compare everything else to. If it does not speak according to His word, then it is not truth. Period. Society does not make a lie truth even if everyone believes it. A religious leader does not determine truth, no matter how many people may follow him. No one is above the Bible. Our opinions and thoughts do not supersede the Bible.

The apostles were disappointed and discouraged because they did not hear the words that went against their mindset. Many Christians today will lose faith when they begin to see how their current belief system is not being fulfilled as they think it should; according to how they have been taught.

The Bible is very plain if we allow it to interpret itself. If we read and study without using the world’s standards as the lens, we can see how God gave us plenty of information to know what is coming in the near future. 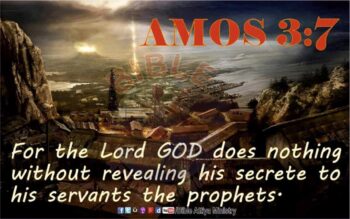 Surely the Lord GOD will do nothing, but he reveals His secret unto His servants the prophets.

There are other verses revealing how God reveals His plans to His servants.

John 15:15
No longer do I call you servants, for a servant does not understand what his master is doing. But I have called you friends, because everything I have learned from My Father I have made known to you.

Revelation 10:7
But in the days of the voice of the seventh angel, when he is about to sound his trumpet, the mystery of God will be fulfilled, just as He proclaimed to His servants the prophets.”

Genesis 18:17
And the LORD said, “Shall I hide from Abraham what I am about to do?

Jeremiah 23:22
But if they had stood in My council, they would have proclaimed My words to My people and turned them back from their evil ways and deeds.”

Ezekiel 29:21
In that day I will cause a horn to sprout for the house of Israel, and I will open your mouth to speak among them. Then they will know that I am the LORD.”

Daniel 2:47
The king said to Daniel, “Your God is truly the God of gods and Lord of kings, the Revealer of Mysteries, since you were able to reveal this mystery.

Since we are given warning in the Bible about what is coming up, what are we to do with this?

“Watch ye therefore, and pray always, that ye may be accounted worthy to escape all these things that shall come to

pass, and to stand before the Son of man.”

We are told to ‘watch and pray’ in numerous places in the Bible.

Yet the majority do not ‘watch and pray.’ They do not study the Bible for themselves. I remember being shocked that people do not even take Bibles with them to church. They completely trust the person speaking to them from the pulpit. They do not even evaluate their words according to Bible truth.

If we examine Bible history, we see it is the church leaders who lead the people in error. The Old Testament speaks of false shepherds several times. It warns that people are led astray by their church leaders.

In prophecy, we learn that these leaders will have their people turn against them because they did not tell them the truth.

But how can we learn this if we do not study for ourselves?

“For when they shall say, Peace and safety; then sudden destruction cometh upon them, as travail upon a woman with child; and they shall not escape.”

Paul tells us in 1 Thessalonians that most will be caught unaware when Jesus comes, but we, as children of God, should not be experiencing the same thing. We are given many words of warning in prophecy.

Truth is readily available if we only seek for it. It’s important to study the Bible for itself, allowing it to interpret itself. Pray beforehand, seeking God’s Spirit to help us with insight. Then praying for strength to walk in obedience to whatever spiritual truth He has revealed to us.

The time for the ‘great controversy’ between God and satan is coming to a close. Right now, satan is going about like a roaring lion, seeking whom he may devour. The only protection for anyone is to walk in obedience to God’s word, keeping our focus on Him. When we do this, He will protect and provide. We are never to compromise over biblical truth. When we do, we move out from under God’s protective banner.

I pray that no one reading this will be caught ‘unaware’ as the five foolish virgins (These represent church people.). I pray that each will study God’s word for themselves and will allow the Bible to provide understanding. Please do not rely on tradition for your understanding, but a simple, ‘Thus says the Lord.’

Dumbing Us Down: The Hidden Curriculum of Compulsory Schooling Food & Mood….Now Trending