The Woes of Isaiah

In 1 Corinthians 10: 11, Paul tells us that the Old Testament stories were written as an example for those who are living in the end times. 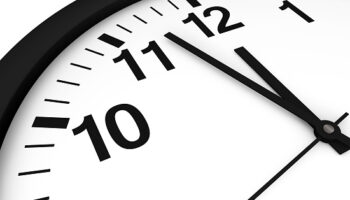 Dear reader, that time is now.

There are many people who only use the New Testament. They believe everything in the old is no longer pertinent. God’s word is timeless. The lessons given in both the Old and New Testaments are for our education and edification. When we read scriptures from the Old Testament, we can ask ourselves, ‘What lesson is there in this for today?’ ‘How does this apply to today’s world?’

As I’ve shared in previous posts, the children of Israel now represent God’s present-day church. When we read warnings to Jerusalem, we can take them to be warnings to God’s church today.

With that in mind, I wish to look at the woes of Isaiah 5 and apply to today’s world. 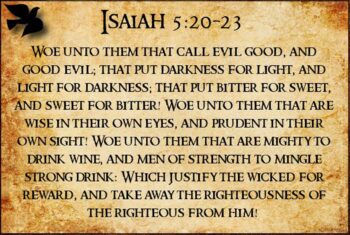 “Woe unto them that join house to house, that lay field to field, till there be no place, that they may be placed alone in the midst of the earth!”

Do we not have crowded housing today? We live right on top of each other. Those who live in large cities often go weeks or longer without being able to get out in God’s nature.

There is both spiritual and scientific evidence that God means for us to be in nature. We are not to be crowded into cities where we have no access to seeing God’s handiwork. 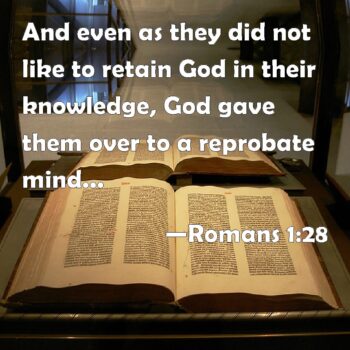 “For the invisible things of him from the creation of the world are clearly seen, being understood by the things that are made, even his eternal power and Godhead; so that they are without excuse: Because that, when they knew God, they glorified him not as God, neither were thankful; but became vain in their imaginations, and their foolish heart was darkened. Professing themselves to be wise, they became fools,

And changed the glory of the uncorruptible God into an image made like to corruptible man, and to birds, and four-footed beasts, and creeping things. Wherefore God also gave them up to uncleanness through the lusts of their own hearts, to dishonor their own bodies between themselves:  Who changed the truth of God into a lie and worshipped and served the creature more than the Creator, who is blessed forever. Amen.”

We can see what happens when we forget to observe God’s wonderful creation. Rather than seeing the world around us as the evidence of God’s character and His love for us, we have corrupted it, worshipping the creation rather than the Creator.

This first woe is a warning. God tells us that the houses will be left desolate, empty, without people to live in them.

This brings to mind the ‘population reduction’ plans of those in power. If it were not backed up by multiple prophecies in the Bible, I would not even listen to them. God’s word will be true. The Bible predictions empty houses and desolation. Therefore, it will happen.

Woe unto them that rise up early in the morning, that they may follow strong drink; that continue until night, till wine inflame them!

We know that the problem of alcoholism (and drug addiction) runs rampant in this country, even throughout the world.

A person may say, ‘Well, I do not drink,’ but do you eat the fake food-like products? Do you eat meat? Meat putrefies in the colon and leaves the body ‘intoxicated.’ In fact, both gluten and dairy have a morphine-like effect on the brain. Do you consume these products?

The majority of people today consume a diet that benumbs the brain. I’m sharing this as another example of how we can be ‘drunken.’

Again, nature is brought up.

Those who choose to participate in lifestyle choices that deaden their mind will reap the consequences. With a deadened mind, a person is unable to appreciate God’s hand in the natural world around them.

The consequences given for this drunkenness is to be led into captivity. They will lack knowledge and be ‘famished’ (hungry) and ‘dried up’ (thirsty).

We may not be physically incarcerated as a result of this drunkenness, but we can be mentally jailed, captivated by sin, unable to restrain ourselves making these destructive choices.

This woe continues describing how hell will have its mouth wide to capture those who are drunken. Not just themselves, but all the work they had accomplished. See, without God leading, all our work is useless.

“Woe unto them that draw iniquity with cords of vanity, and sin as it were with a cart rope:”

This refers to those people who cling to sin. They do not want to give up their ‘lusts of the flesh.’ 1 John 3:4 tells us that sin is the transgression of God’s law. There are numerous verses regarding the hazards of living according to the lusts of the flesh. (1 John 2:16) In fact, in 2 Tim 3, we are told to avoid those who live to the flesh. Avoid those in the church who live according to the world’s standards.

Jesus gives a warning in Matt 7:21-23 that it is not only claiming to be a child of God that gets us into heaven, but doing the will of God, which is to walk in obedience. 1 John tells us that if we do not live in obedience, then we do not know God. Jesus in the above passage says ‘depart from me, I never knew you.’ This is because of iniquity, breaking of God’s word.

“Woe unto them that call evil good, and good evil; that put darkness for light, and light for darkness; that put bitter for sweet, and sweet for bitter!”

I think this is easy to see. We have all the transgender, LBGT community. We have the attack on conservative Christian values. Just because society deems it acceptable does not mean it is not sin in God’s eyes.

Does this not describe man in this day? 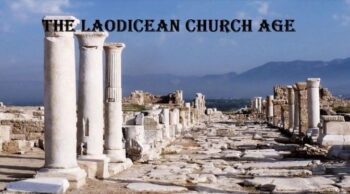 Rev 3: 14-22 describes the church of Laodicea. Vs 17 is the exact description of how we feel about ourselves today.

“Because thou sayest, I am rich, and increased with goods, and have need of nothing; and knowest not that thou art wretched, and miserable, and poor, and blind, and naked:”

Jeremiah 17:9 says the heart is deceitful above all things. We cannot go by feelings. We have to cling to what is written in God’s word.

“Woe unto them that are mighty to drink wine, and men of strength to mingle strong drink: Which justify the wicked for reward, and take away the righteousness of the righteous from him!”

This is about taking bribes. Our whole gov’t system is built on bribes by lobbyists. There is another aspect to this. Wine in prophecy represents false doctrine, man’s traditions. ‘Mingling strong drink’ is a term that refers to the blending of pagan and biblical principles.

These six woes are followed by the consequences of those who choose these actions. They will be consumed by fire until they are stubble (Vs 24). 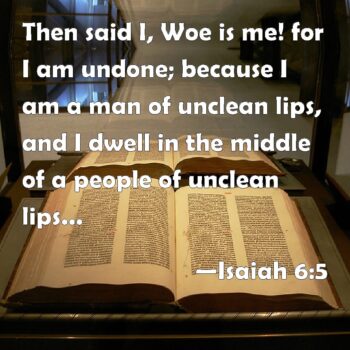 Now, this post has been about the six woes of Isaiah 5. However, chapter six has one more woe. It’s Isaiah saying he is a man of unclean lips. He is surrounded by those who are unclean also.

No one is righteous. We all sin and fall sort of the glory of God.

If we continue in chapter six, we will see how the angel flies from the sanctuary, with a coal from the mercy seat (where the law is kept), and uses it to purge the sin from Isaiah.

It is the law that gives us the guidelines to live by so we do not sin against God. Keeping the law does not save us. We are saved by grace and faith in the act of Christ dying for our sins. However, if we love Him, we keep His commandments (John 14:15). Obedience is the proof of our love and of being saved. It is what sanctifies us.

I pray that this study has been a blessing. I pray that each reader will pray and seek God’s guidance in seeing where s/he may be living out a condition spoken against in these woes.

A Famine in the Land Hating our Enemies