After Being Pardoned, Do We Still Break the Law?

I had my Bible study today. We are studying God’s governing law, the ten commandments. As we were finishing up, we talked about various aspect of the law.
So many claim that the law has been done away with, despite the Bible’s very clear statements that it is not. Even Jesus said He came to fulfill the law, not do away with it. I’m not sure how much clearer you can get than that.

We talked about the example of a prisoner on death row. We are that prisoner on death row. We are there because of sin. *Wages of sin = death.
In the example, the governor pardons the prisoner and allows him to return to living in society. What happens if that prisoner returns to his life of crime? What if he continues to break the laws that he broke that put him behind bars?
Well, easy…he would return to prison and receive the death penalty.
Now, let’s switch it up.
Jesus is in place of the governor. He pardoned us from death row. We are slated to live in heaven, under heaven’s governing laws (the ten commandments). If we want to be able to get to heaven, should we return to breaking the laws we were breaking before?
No. If we do, then we will be unable, unqualified to live in heaven. We will lose our ‘pardon.’ *Ezek 33
Without our pardon, WE have to pay the wages of our sin, which is death.

Before all this started, there was a war in heaven. Satan, Lucifer, did not want to follow the governing laws. After the war, satan and his followers got kicked out.
Eventually he made his way here to earth where he tempted Eve to break the rule God gave her. Then Adam also broke the rule.
From that time, until now, all the things that we read about in the Bible have been about God trying to teach us to follow His governing laws so we can go live with Him in heaven.
In the OT, the children of Israel kept saying, ‘We will do this (follow the law), but they didn’t. We know their story. They kept saying they could do it themselves. But they couldn’t.
This time was important because it showed us our need of a Savior.
Then, Jesus came to demonstrate to us how to live according to God’s law. He did this fully as a man, without any power of His divinity. He did this by relying on God’s strength.
Now, God says that He wants to write His law in our minds and hearts, because it is out of the abundance of the heart that the mouth speaks. If we have His law in our inner most being, then we will obey it. We will live its principles out in our daily lives.
As we do this, as we die to self and allow God to live in us, then we will live lives that are pleasing to Him. We will live according to His governing law.
This process of change (sanctification) where we begin to live out God’s law in our lives, is the work of a lifetime. Justification is imparted at the moment of salvation. As we allow God to transform us (writing law in minds/hearts), then we have God’s righteousness imputed to us.
We grow into those robes of Righteousness that we are given at the point of salvation. Throughout time, Jesus helps us ditch the filthy rags that the robe covers up. Then we are more comfortable in our ‘Christian’ walk. We are ‘walking our talk’ and living God’s love in action.
At no time does it become ok to start breaking God’s governing laws again. They have been there as long as God’s been in heaven. They will remain there throughout time because God never changes and neither does His law.
Most Christians agree that it is still important not to have idols, not to take God’s name in vain, and respect/honor our parents, not to lie, steal, kill, commit adultery, etc.
However, when it comes to the ONE commandment that starts with ‘REMEMBER,’ all of a sudden they say the law has been done away with, it’s no longer in effect (The Bible never says this.). Suddenly, they do not want to follow that one commandment. They think that as long as they observe ONE day, it doesn’t matter. 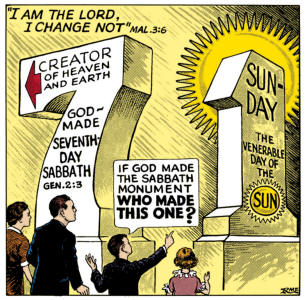 It matters to God.
See, God has an enemy, satan. Satan does not want us to worship God in truth. He wants to the be object of our worship. For each of God’s truths, satan has a counterfeit.
So God has a day of rest, the seventh-day Sabbath. Satan has a counterfeit day of rest, Sunday. *Not getting into the history of this change. It’s easy to find.
What’s important is that if you want to follow God in truth, then you will worship on His day. Cain gave us an example of what happens when we choose our own way of worshiping God. His sacrifice was refused.
What happens if we offer a counterfeit day of worship??? Think about that. Read the Bible closely. The answer is in there.
The point with the day of worship will come to the front very soon. Right now, the truth is going out all over the world. When satan comes in his counterfeit appearance of Christ, he will say that the law has been changed. This is a lie.
If you do not know the truth and follow it, you will be deceived. Then you will be lost.
Now is the time to study and follow what the Bible says. Solo scriptura. No man, no matter who he is, has the authority to change God’s law. No man.
I pray each will examine for himself what the Bible says. I pray that you will walk in obedience, depending completely upon God to do so.
The point of the matter, God can only allow those who will obey His law of governing into heaven, since we are assured that sin will no longer break out again. If we cannot obey here, how will we obey there?
Something to think about.
Image to the Beast: Forced Compliance against Conscience Dealing with Leaky Gut